for making this data available

The Oscars, like most award shows, are a mixture of the scripted and the unscripted. While the skeleton of the show rests upon the predetermined quips of the host and award presenters, the flesh of the Oscars rests within the surprise wins that are embodied by acceptance speeches given by excited, nervous, and often emotional award winners. Every year there are dozens of Oscar speeches and this year I began to wonder what one could glean from all that information abstractly balled up into little packages of “thank you”s and “wow”s and “I love you, mom”s that are spilled out onto the stage year after year.

Previous inquiries into Oscar speeches have investigated whom people thank while on stage as well as the counts associated with certain phrases such as “Wow,” “England,” and even “Oprah.” However, a topic that has not been deeply investigated is how features of acceptance speeches differ across groups of winners. For instance, with respect to word count, it is certain that the most-hyped awards (Director, Best Picture, Best Actor, etc.) have speeches with higher word counts than others since the threat of being “played off” is not as looming for the sparkling celebs as it is for the sincere, but not-Dior-wearing, Documentary Filmmakers. On the other hand, I was less certain about how Best Director speech lengths would compare to Best Picture speech lengths–they are definitely shorter than Best Picture but longer than Visual Effects, however, the specifics have not been previously documented.

Another element of speeches that I thought would be interesting to investigate is the usage of words that are explicitly self-referential, such as “I” or “me,” as opposed to words that reference one’s part of a larger group, such as “we” or “us.” Comparing the percentages of self-related words to the percentages of team-related words could tell us something about the degree to which certain awards are self-oriented or team-oriented.

To address both the element of word count as well as the element of the self vs. the team, I used the Academy Awards Acceptance Speech Database (yes, that is a thing!) to collect the transcripts of all acceptance speeches given over the past 5 years (that is, speeches given during the Oscars 2010-2014) and looked into four specific statistics by award winner category.

The four statistics1 are as follows:

See the heat table below (made using the ggplot2 package in R) for the averages of these four statistics across all award categories23: 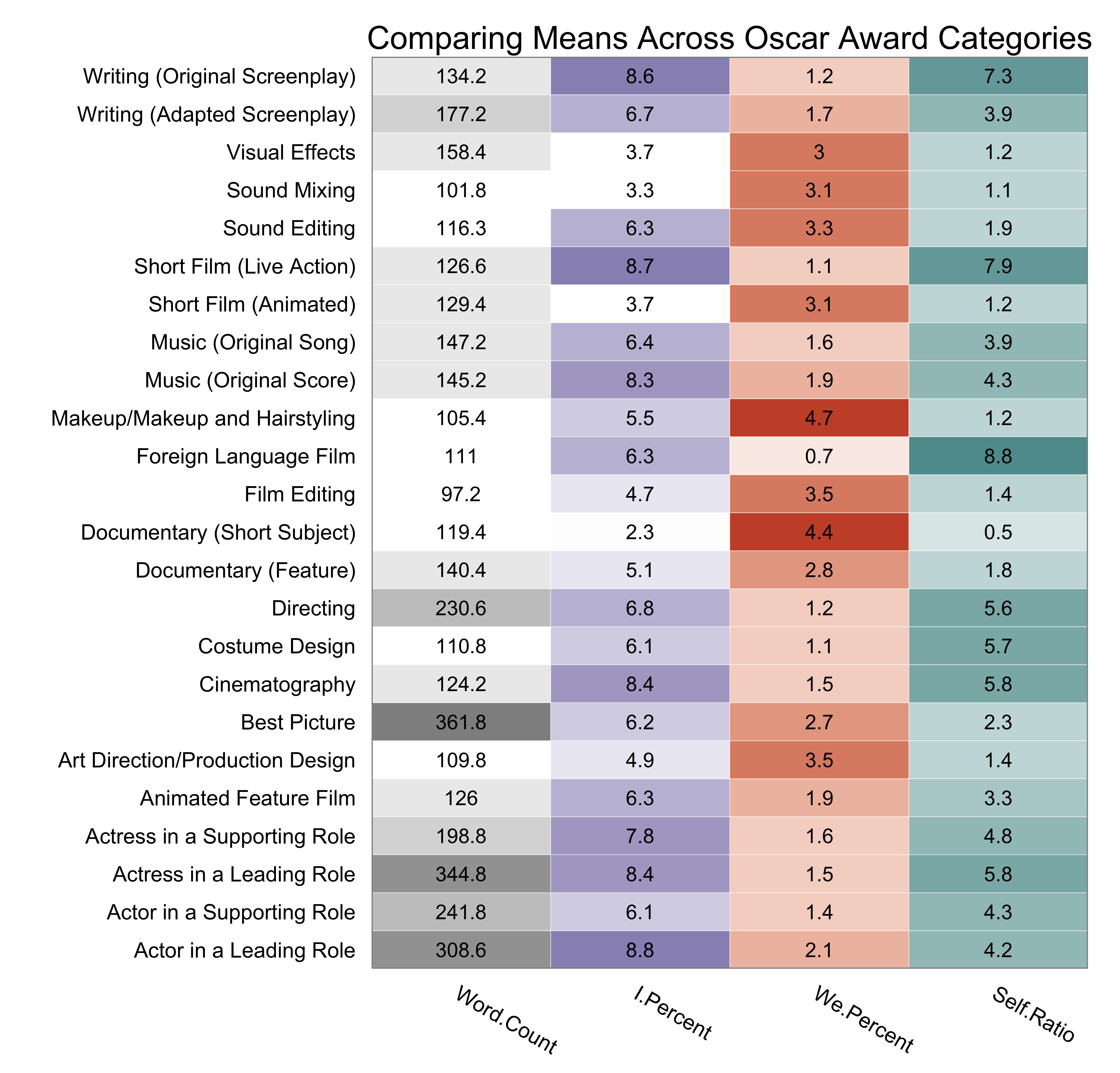 Though I was originally primarily interested in the averages of these statistics over the award winner categories, I realized I could also investigate these same statistics over four gender-actor categories: Female Actor, Female Non-Actor, Male Actor, Male Non-Actor. Using this breakdown, I was curious to see whether male and female actors as well as male and female non-actors would have similar statistic averages. 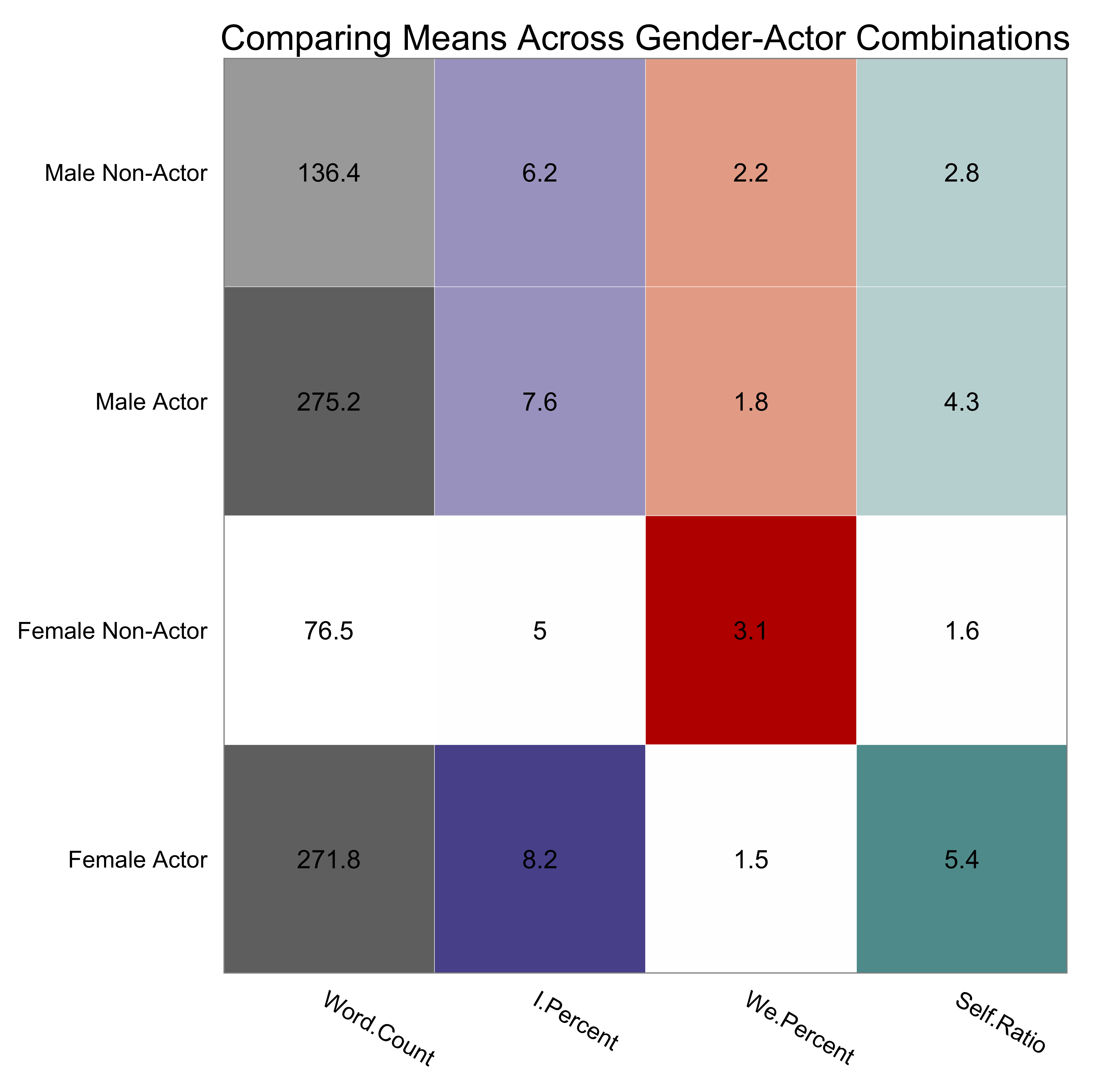 It is immediately evident from the heat table that both genders of actors possess very similar numbers across all four statistics. Meanwhile, the Male Non-Actors speak almost twice as much as the Female Non-Actors, 136.4 words compared to 76.5 words. Therefore, outside of the actors, if you’ve ever thought that women don’t speak as much as men during acceptance speeches the Oscars, this is not just a consequence of fewer female award winners–no, this means that even when women do win an award, they, on average, only speak half as much as the men who win. I would hypothesize this is because women rarely speak during the non-acting awards with the longest word counts–the Best Picture and Directing Oscars (In fact, only one woman has ever won the Directing Oscar). The fact that women often don’t get to speak in these two large categories probably makes a significant difference in the non-acting word count averages. Furthermore, this gender word count difference could also be due to the fact that, since women often win non-acting awards within a larger team, men on the team speak first and use up some of the team’s shared time, leading to a shorter word count for women’s speeches.

The heat table also makes evident that Actors possess higher Self.Ratios than Non-Actors and Male Non-Actors have a noticeably higher Self.Ratio than Female Non-Actors, 2.8 compared to 1.6. This implies that women outside the sphere of acting are more likely than their male counterparts to use words that emphasize the greater team effort. Part of this difference could, again, be due to the fact that women are more likely to share awards than men, meaning their acceptance speech lexicon reflects this circumstance.

Due to the obvious differences between non-actor men and women, I decided to delve deeper into the question of gender in acceptance speeches. Instead of looking into words spoken per speech, I now look at aggregate words spoken during the acceptance speeches of the past five years of award ceremonies. Male and female actors have spoken very similar amounts, with 2,718 words spoken by female actors and 2,752 words spoken by male actors. On the other hand, the distinction between non-actors is striking but unsurprising if you’ve paid attention to who you are always listening to when watching the show–while 2,065 words have been spoken by female non-actors, 12,416 words have been spoken by male non-actors. See below for a simple visualization of these differences: 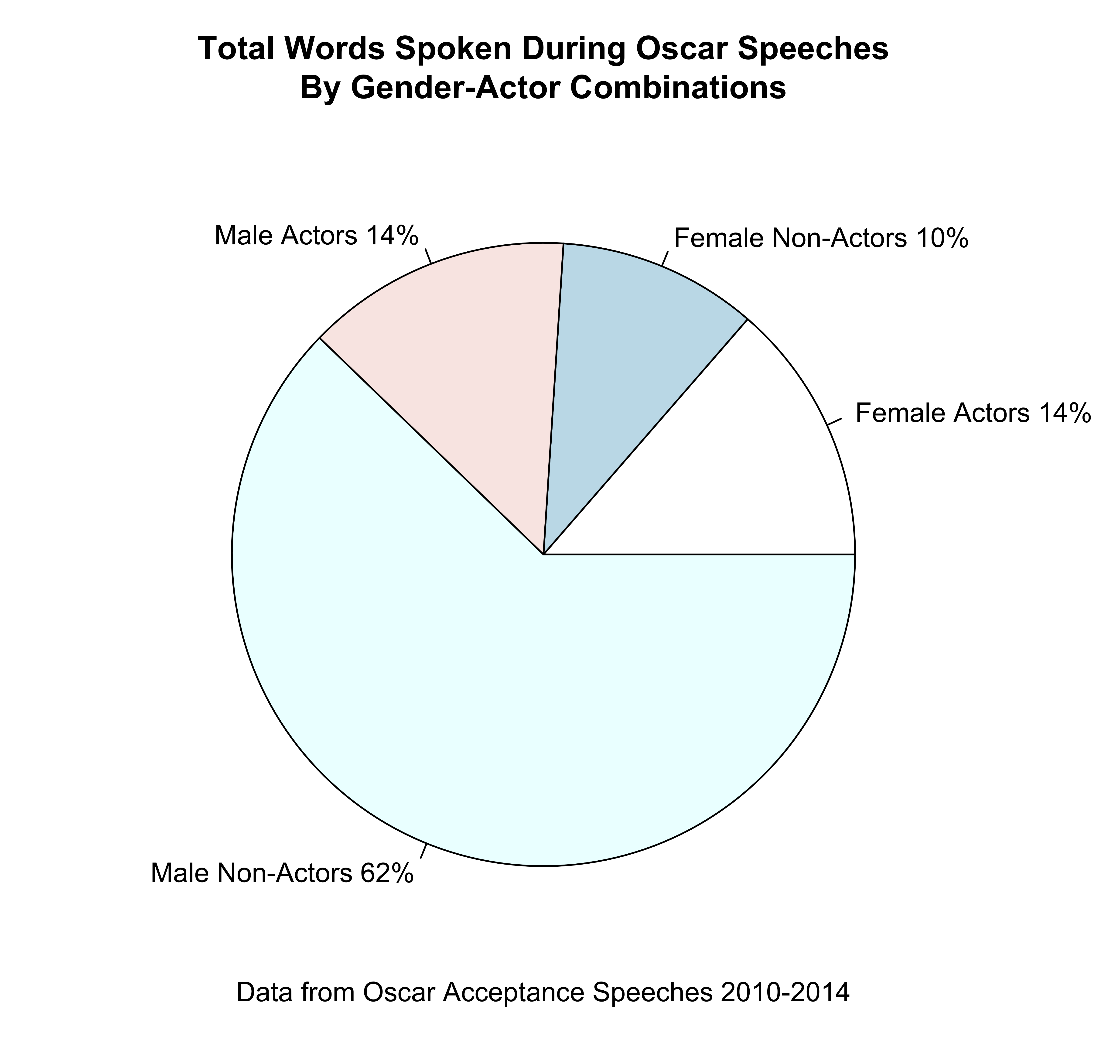 These numbers mean that outside of the case of the actors, men have spoken more than six times as many words as women in acceptance speeches over the past five years of Oscar ceremonies. Even more disturbing is that, over the past five years, the total number of words spoken by female actor winners, 2,718, is greater than the number of words spoken by all other women during the rest of the acceptance speeches, 2,065 words. It is clearly troubling that the two awards that necessitate female winners generate more words spoken by women than do all other awards.

It is a well-known fact that more many more men win awards than women. Specifically, in the past five years, the winners list includes 141 men and 39 women (excluding Best Picture and Foreign Language Film since these are not awards for individuals). When excluding the two male actors and two female actors that win every year, that becomes 131 men and 29 women. However, as I illustrated in the second heat table, even when women win in non-actor categories, they still talk significantly less than the men who win non-actor categories (approximately half as much).

I mentioned previously that I thought this could be because when women win in non-actor categories, a team often accepts the award, which might lead to women being talked over by men. Well, while men tend to speak first, it is not as egregious as one might think–it turns out that in the past five years there were 16 instances in which at least one man and one woman spoke on the stage in order to accept an award together. In 11 of these 16 instances, a man spoke first to begin accepting the award. As Elinor Burkett exclaimed, after her male co-winner spoke, in her 2010 Documentary (Short Subject) acceptance speech:

Don’t you like that the man never lets the woman talk. Isn’t that just the classic thing?

All scripts and data files necessary to recreate the included visualizations are available in my “Oscars” Github repo.