It's Raining Cats and Dogs Data

In my day-to-day, I often work with data on ages and names. Age is an important covariate to include in regressions; its continuous evolution can also lend itself to clever regression discontinuity designs.2 Meanwhile, names can be used to infer often omitted demographic variables such as gender and race.3 I have seen these two variables collected for scores and scores of people… but, what about when the sample isn’t people anymore?

Back in April, Data is Plural linked to a spreadsheet maintained by the Sunshine Coast Council in Australia.4 The spreadsheet lists all animals registered with the Council – that is, 55,495 dogs and cats.5 Among the variables collected on each of these pets is (you guessed it): name and age! As such, please humor me while I take the opportunity to compare dogs and cats along these two dimensions.

Lots of intriguing analyses have been done with respect to human names. Creative bloggers have investigated age distribution by name, the most unisex names, the trendiest names and, lastly, the most poisoned names. However, blog content comparing cat and dog names is nonexistent to my knowledge. What a hole in human knowledge, I agree!

The Sunshine Council data includes 55,495 registered animals.6 Of that 9,412 are cats and 46,083 are dogs, meaning there are almost 5 times as many dogs as cats in the data. If I sum up totals for names, I end up with the following top 5 names for cats and dogs.

Bella has been shown to be a popular name in NYC for dogs as well. The Bella trend is also pretty clear for humans… Twilight’s cultural legacy will endure for decades through these very names.

Since most of the top names are the same for dogs and cats, it would be more interesting to see which are most uniquely cat-y or dog-y names. As such, I generate tf-idf measures for all the dog and cat names to measure their relative importance.7 In other words, I identify names that are frequently given to cats but infrequently given to dogs and vice verse.

It’s probably not mind-blowing to tell you that a Puss or Mittens is likely a cat rather than a dog. However, Hudson as a dog-specific name is new information to me.

In looking through the age data, the five oldest pets are 71, 52, 42, 31, and 28 years-old, respectively. Are these ages for real?! It seems hard to believe, but the Council does make people renew them annually. In that case, can someone please go visit 71 year-old Sprocket in Mooloolaba? 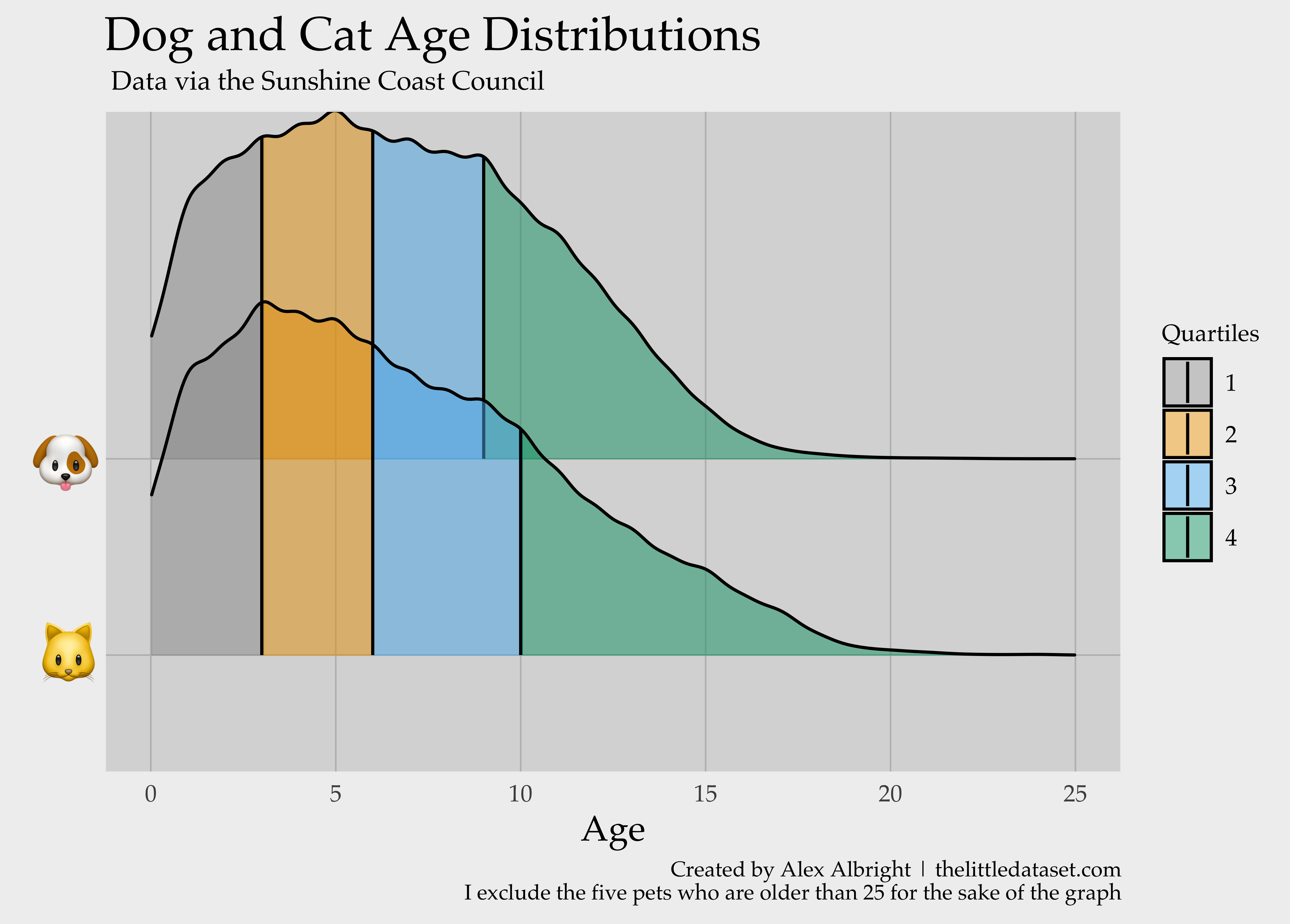 An Aside on Dog-Years

Given that I have a distribution of dog ages at my disposal, it would be an oversight not to address the conventional wisdom on “dog years.” It’s deeply embedded in the zeitgeist that a dog year is equivalent to seven human years. A 2008 WSJ article explains the possible origin story as follows:

Somewhere along the way, it seems likely to several veterinarians, typical lifespans were pegged at about 70 for humans and about 10 for dogs. Thus, the seven-year rule was born. “My guess is it was a marketing ploy,” says William Fortney, a veterinarian at Kansas State University, “a way to educate the public on how fast a dog ages compared to a human, predominantly from a health standpoint. It was a way to encourage owners to bring in their pets at least once a year.”

After that WSJ article, a Priceonomics article was written that explained why data is lacking on pet lifespans:

Yet because there is no canine equivalent to the National Center for Health Statistics, we rely on a triage of sources for their lifespan data: pet insurance companies, breed-club surveys, and veterinary hospitals. As Carl Bialik of the WSJ notes, these sources often provide inaccurate, skewed results. Dogs who have insurance, for instance, are generally more likely to live longer lives. Surveys, which often require owners to guesstimate their pets’ ages, yield inflated numbers.

With this data on registered dogs in Australia, I can compare ages across dog and humans in a way that data-enthusaists 10 years ago could not. Let’s compare median ages.8 The Australian Bureau of Statistics says the median age for Australian is 37, as of June 2017. Meanwhile, a simple calculation shows that the median Australian dog age is 6. Assuming we want to match on medians, dog-years could be defined as 6.166667 human years. Hey, that’s pretty close to 7!

Back to Human Data

Self-care is exploring/visualizing data that has nothing to do with my PhD research. 🐱 🐶

Thanks for the therapy-dog-&-cat-data break, Sunshine Council.