The gift of Fitbit data1

Jesse had been asking me for a while if I wanted a Fitbit… When the subject came up again in October, I was pretty sure I knew what I’d get for my birthday in November. That was back in 2018, which means that I’ve been wearing this lil device on my wrist for well over a year now. I initially thought that I’d get really into tracking my steps, but it turns out that my interest in active time paled in comparison to my interest in one particular kind of inactive time: sleep. 😴 😴 😴

Now, on mornings when I find myself pulled out of a dreamscape by the sound of whatever song has recently been promoted2 to alarm music, I often say something like,

Oh, I was totally in REM.

I’ll then check my sleep summary and say, to no one in particular,

After a staggering 425 days of annoying Jesse with hot takes on my sleep cycles, I decided it was time to export my entire account archive and dig into the raw sleep data. Since time and space around sleep are inherently fuzzy – my conscious self can’t be sure when it took off for the evening – I want to use my data to have a better sense of the daily patterns of my unconscious self. Specifically, I’ll use some new (to me) visualization methods + R packages3 to address the questions: (1) how much do I sleep? and (2) when do I sleep?

Hopefully this exercise provides some guidance/ideas to others who want to dig into their Fitbit data as well as an array of approaches to visualizing events (sleep, in this case) over time.

My archive includes 456 sleep events recorded over 425 days.4 Since I’m curious about how much I sleep per day, I work with Fitbit’s minutesAsleep variable to plot the distribution of “hours asleep per day” with the below histogram (the bins are 30 minute increments).5 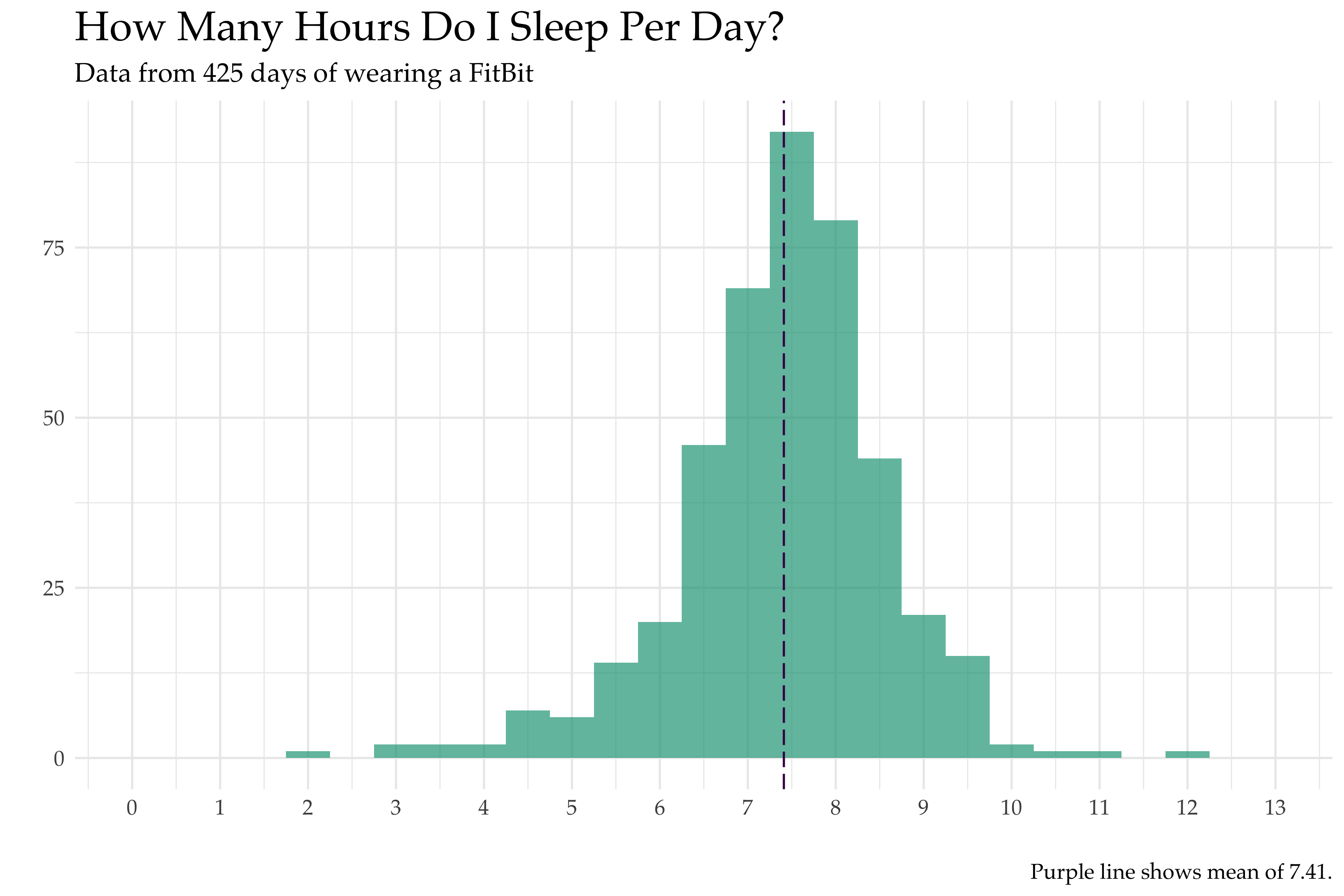 With the amount quickly pinned down, I move onto the more interesting question: when during the day do I sleep? I generally think of myself as a night owl – it’s easy for me to accidentally stay up until 2am… but it is quite difficult to get up before 8am. While I constantly say that causal inference is hard, those two are probably related.

To answer this question, I first want to display at the distribution of times when I fall asleep and wake up. (For everything that follows I’ve rounded times to their nearest 30 minute increment.) Since hours in the day are mod 24 (they loop around), this is a great opportunity to use polar coordinates for visual representation. I plot both distributions with a nightingale graph below – the purple bars show the frequency of times for falling asleep and the green bars show the frequency of times for waking up. 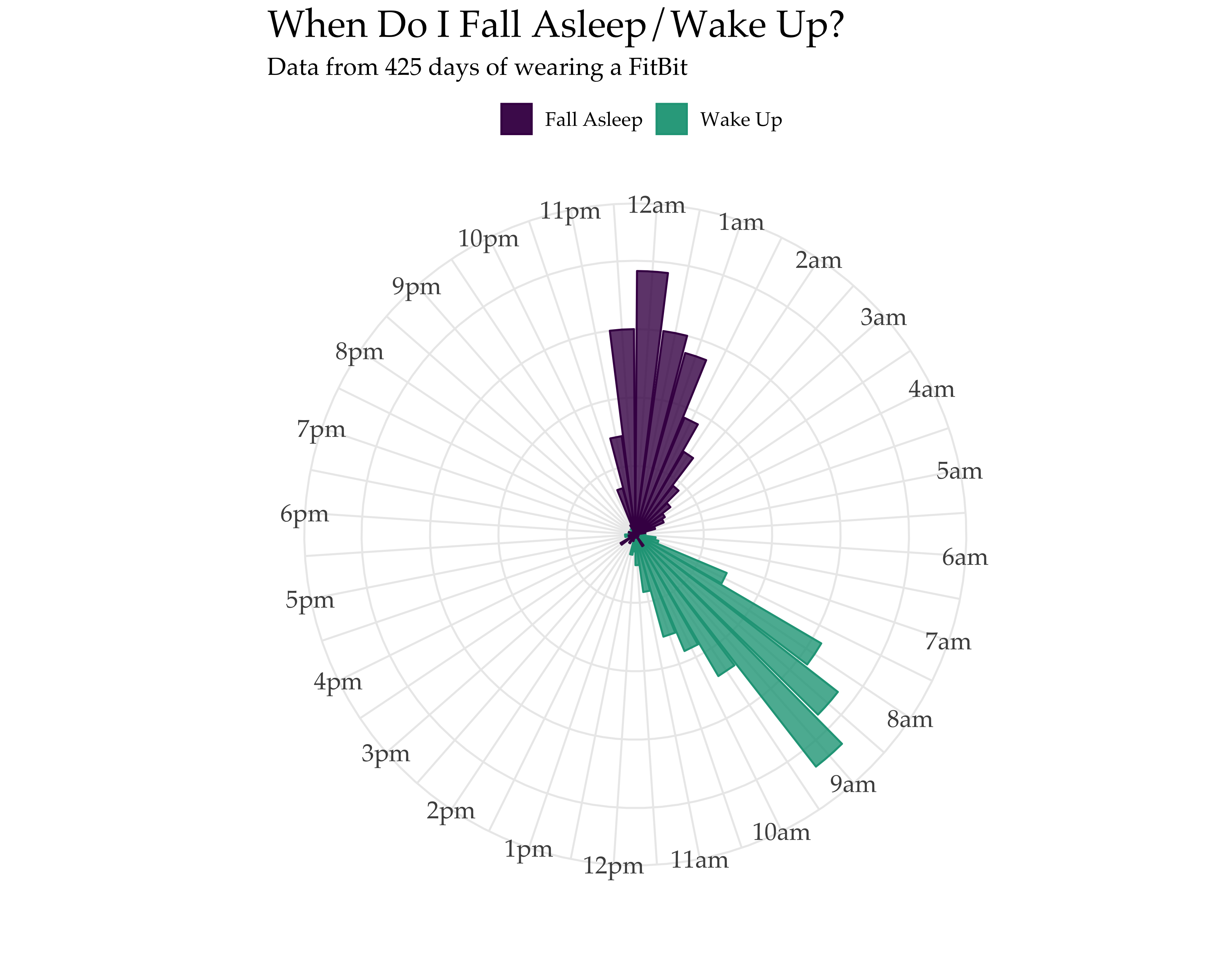 While my original “when do I sleep” question is well answered by the above visual, I wanted to use the same data to explore a few new visualization techniques. For instance, I was inspired by Nick Strayer’s great blog post that uses R to play with Fitbit heart rate data to make a “raster plot”.

The idea, as applied to my data, means that each horizontal strip is a day in my life (as recorded by Fitbit) and the colors of the the strip indicate if I was asleep or awake at a given hour. The strips start and end at midnight (aka hour 0).7 This is also very similar in concept to “The Sleep Blanket” created (and literally knit8) by Seung Lee. 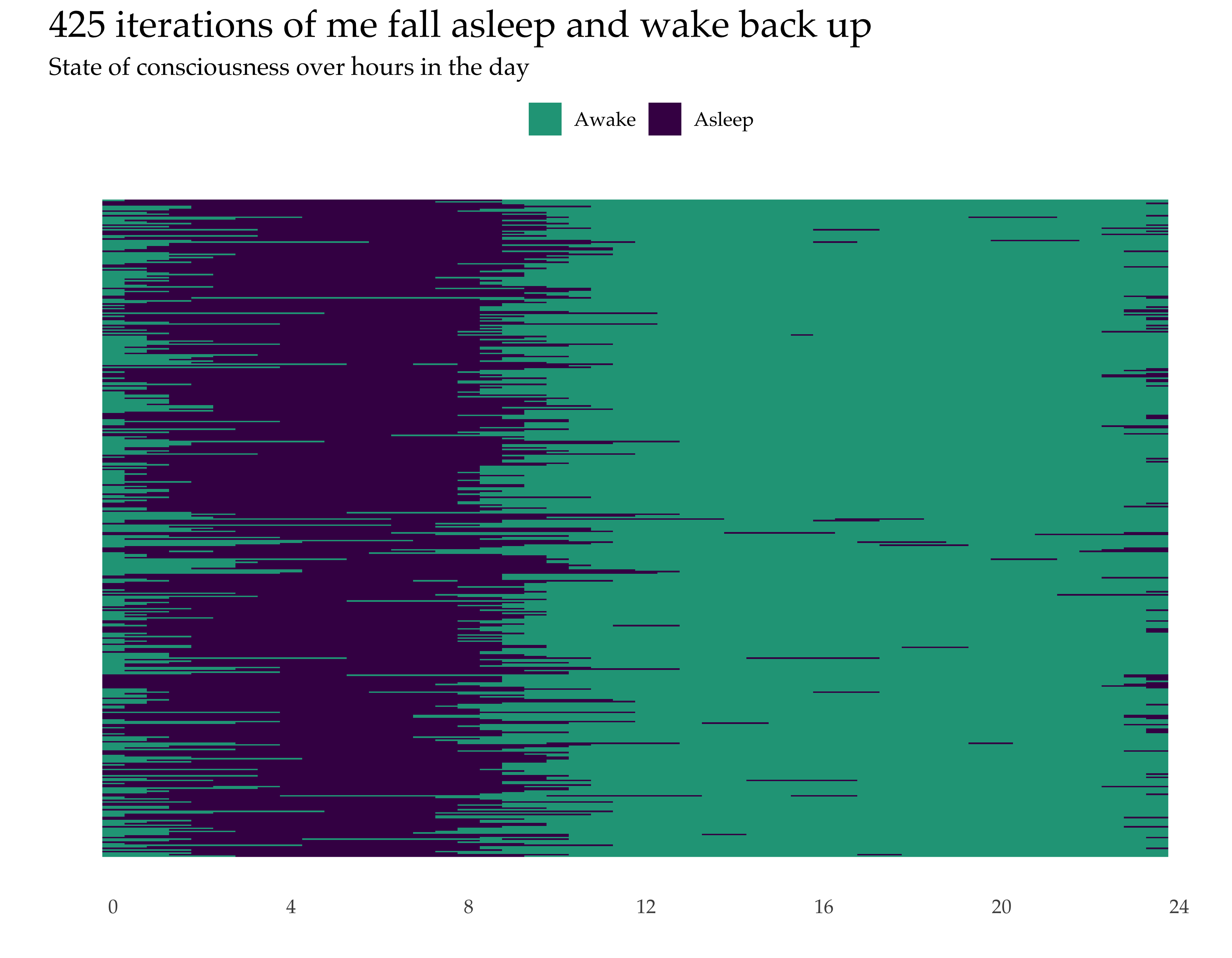 Lastly, the structuring of the data for the raster plot (observations by day showing sleep/awake status over time within day) made me think of Nathan Yau’s fantastic moving bubbles chart using data from the American Time Use Survey. I wanted to see if I could make similar visual in R where each bubble is one day’s observation and the movement is across different states of consciousness.9 So, I built an animation with the R package gganimate!10 While Nathan’s data visualization shows movement over activities by time in the day over 1,000 Americans, mine shows movement over activities (sleep only) for 425 different versions of the same person (me).

While you can see large batches of my past selves head to sleep and/or wake up in unison, this genre of visual also highlights those rare days that featured waking up at 4am in the form of pesky dots that diverge from the crowd and literally hop out of line… Go be free! (But also, please get some sleep.)