Illustrating the Size of International Student Populations in Science & Engineering

Breaking: The government has agreed to rescind DHS and ICE rules barring international students attending online universities from staying in the U.S., per a hearing this afternoon in Harvard and MIT’s lawsuit against the agencies.

More important info in this thread, including this point: “DHS is likely going to try again with some sort of restrictions on “newly enrolling,” international students, but keep those already in the US or already enrolled in schools unaffected. So stay tuned.”

On Monday 7-6-2020, the U.S. Immigration and Customs Enforcement (ICE) said international students will have to leave the United States if their schools are not offering in-person classes in the Fall. Harvard and MIT are suing the Trump administration over this policy. The US District Court will be considering a preliminary injunction and temporary restraining order on enforcing the ICE regulation today (7-14-20) at 3pm ET.2

This regulation is horrifying in its intent (and brazen lack of concern for well-being)3 as well as its potential scale – there are about 1 million international students studying in the US every year.4 International students are not only a crucial part of our academic student communities – in some cases, they are actually most of the academic student community! In my discipline of economics, for instance, 60% of doctoral degree earners are temporary residents (those on student visas) rather than US citizens or permanent residents. To implement this regulation is to cruelly and illegally disrupt the majority of our peers’ lives.5

International students in science and engineering

I recalled from a 2015 project that the NSF posts data on doctoral degree earners by citizenship, race, and ethnicity. The most recent data covers 2006-2016 and is available as table 7-4 here. When the NSF says citizenship, they use the categories of “temporary resident” or “US citizen or permanent resident”. If the difference between these definitions isn’t well known to you, you are probably (like me) in the US citizen category and thus (in a state of blissful ignorance) you don’t have to know all the different definitions. Permanent residents are those with green cards, while temporary residents are those on student visas.8 The ICE regulations thus impact students who fall into the temporary resident category – I also refer to this group of students as international students. [Please do email me if there’s an issue with the temporary resident/international language – happy to update and learn more about how to be precise and accurate with these terms.]

According to NSF data, 27% of all doctoral degree earners (2006-2016) were temporary residents. When it comes to science and engineering, this percentage increases to 38%. (For economics, in particular, it’s 60%.) These are huge figures, especially in comparison to the broadest statistic when it comes to higher education – 5.5% of all students in the US higher education population are international. Clearly, international students make up a much larger percentage of the student population at the doctoral level than at the undergraduate level.9

Science and engineering in the NSF definition includes disciplines ranging from social sciences like anthropology to engineering fields like aerospace engineering. As such, it’s worth looking at doctoral student populations by more specific fields. I use the flowchart below to show how the NSF categorizes disciplines for context. When I discuss fields, I use the most specific field the NSF provides rather than groupings like “social science” or “engineering”. 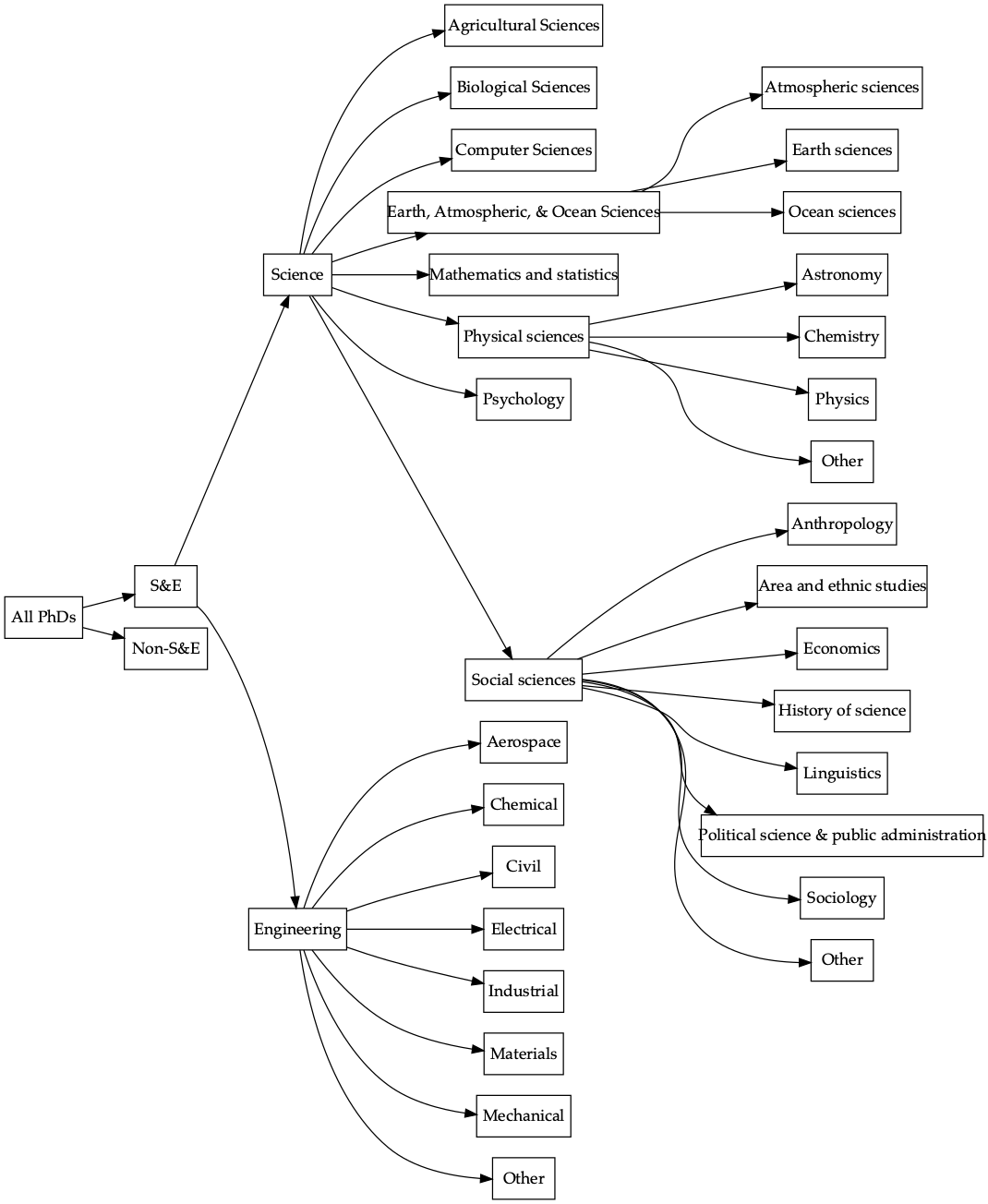 First things first, I show the total number of doctoral degrees awarded 2006-2016 by discipline. I then color by the NSF citizenship category.10 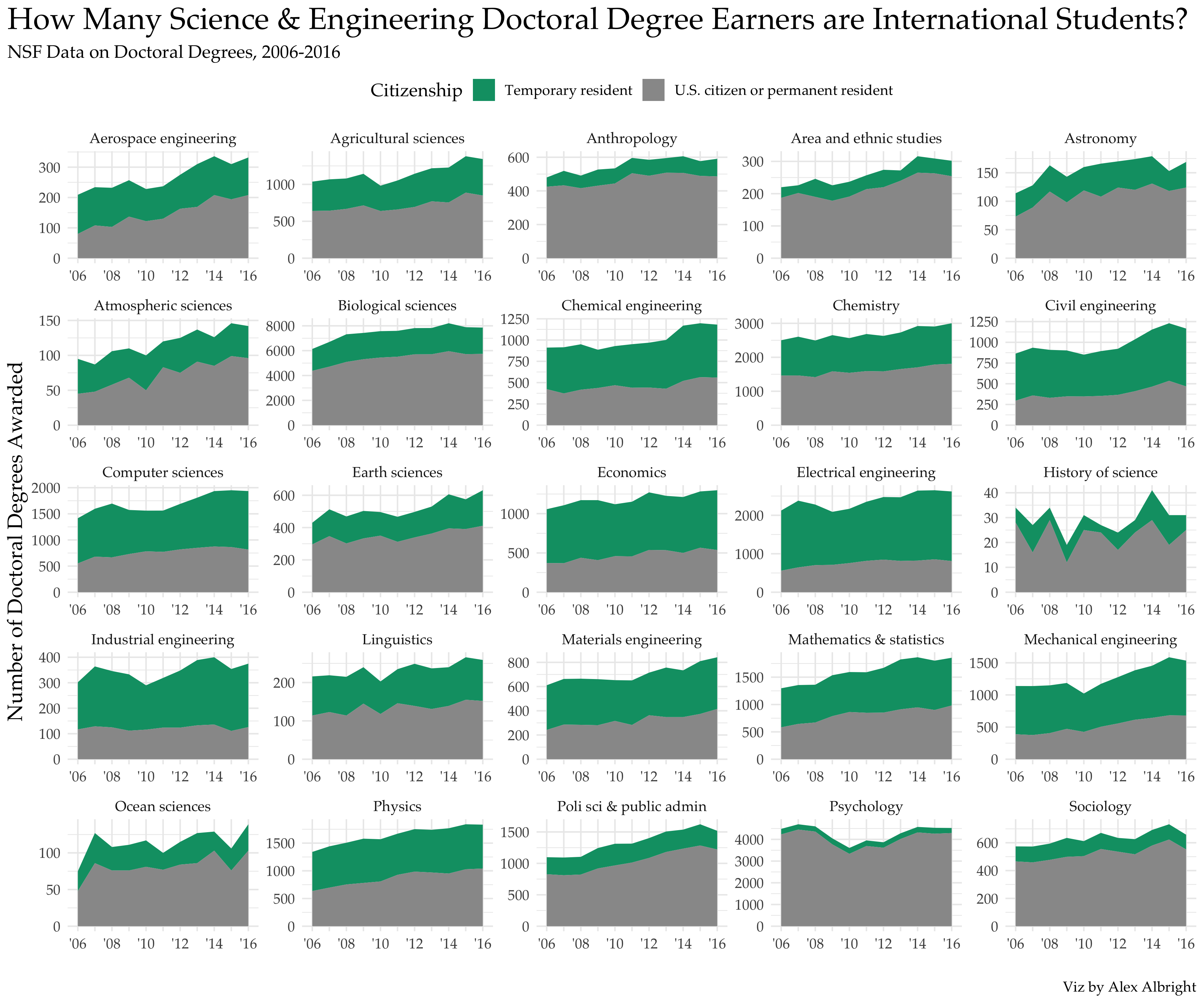 While the above shows the count of doctoral degree earners, another figure of interest is the percentage of each discipline’s population that is international. I show these percentages over 2006-2016 using the below nightingale plot.11 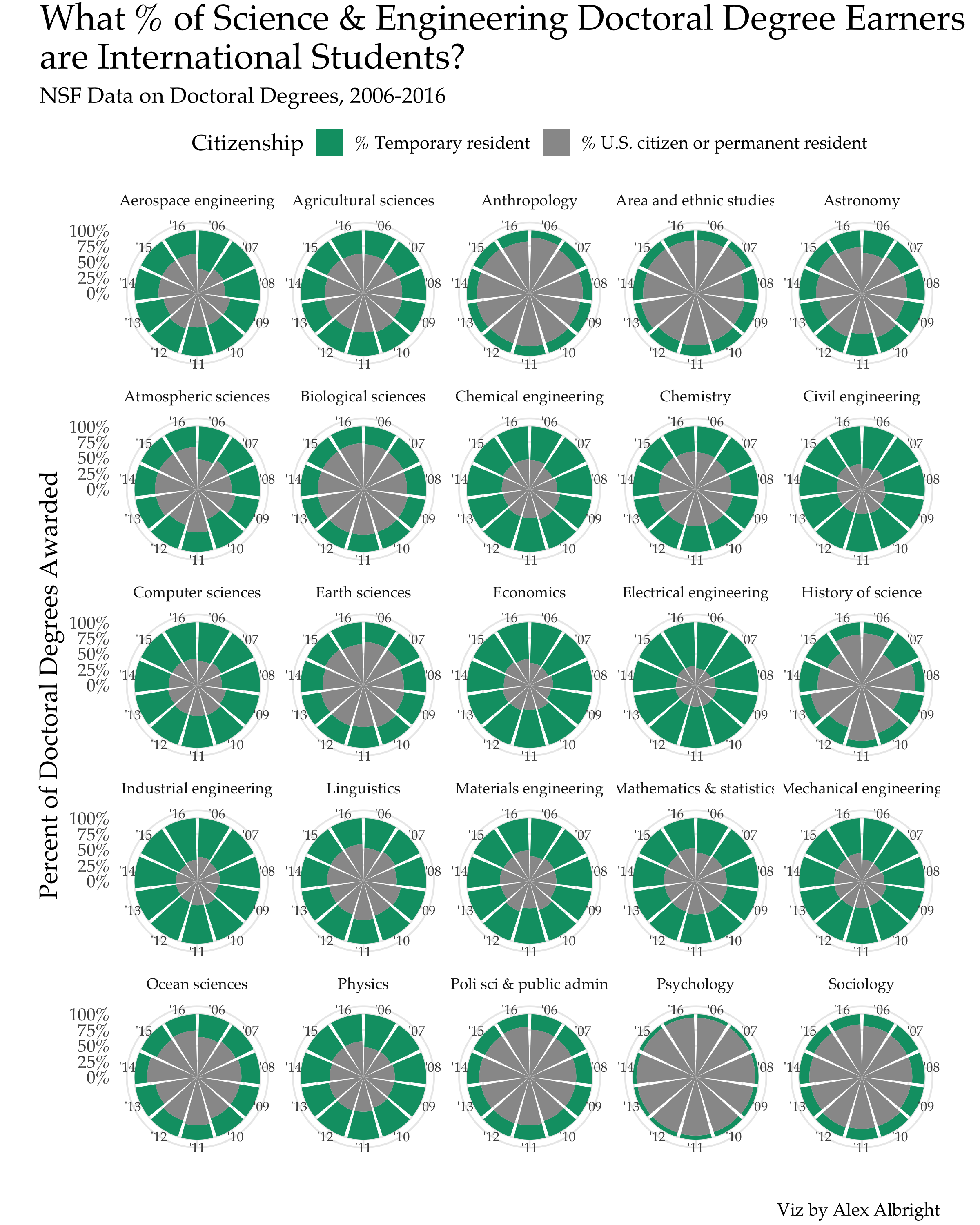 While the two above plots show counts and percentages for each of years 2006-2016 separately, the trends over time aren’t of great importance to my overarching goal for this post. So, I also simply calculate the percentage of doctoral degree earners that are international across all years 2006-2016. Those stats are represented by a simple bar plot below. I color economics orange for emphasis since that’s my academic community. All engineering fields except for aerospace have a majority international doctoral student population. Computer science and economics also have majority international doctoral student populations. 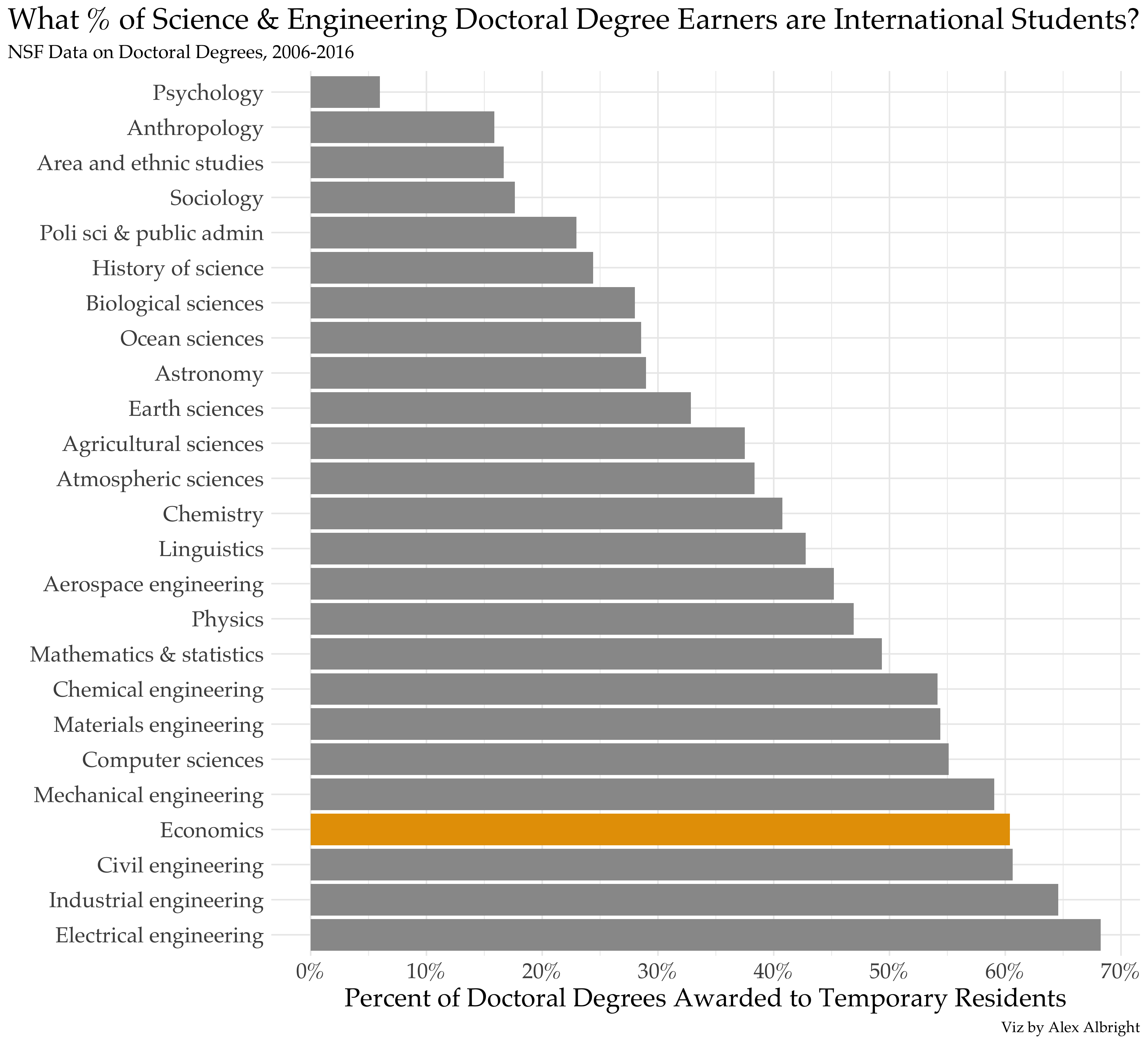 Of course, the fact that less than 10% of doctoral degree earners in psychology are international doesn’t mean that ICE’s regulation isn’t vitally important to the doctoral psychology community. Affronts to the safety and humanity of even small percentage of students are always worth fighting. Nevertheless, I hope pointing out the population compositions by discipline aids our understanding of the vast scale of the detrimental impacts of this policy for doctoral communities. I stand in opposition to ICE’s announcement with my peers pursuing doctorates, with HGSU-UAW at the MA State House, and on the phone for today’s 3pm ET hearing.